Apollo Munich Health Insurance (AMHI), one of India’s standalone health insurance companies has entered into a multi-year partnership with former Indian cricketer and our very own Dada – Sourav Ganguly 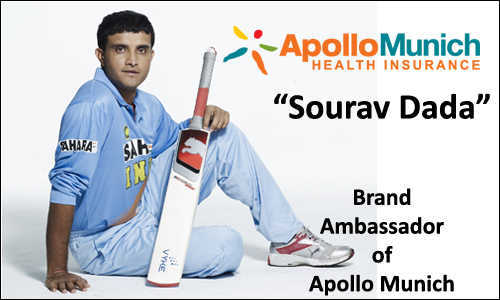 Sourav Ganguly will be the brand ambassador for Apollo Munich and be part of the marketing and promotional initiatives of the company. Ganguly who is regarded as one of India’s most successful captains will be seen promoting the brand Apollo Munich in the forthcoming Indian Premier League (IPL) Season 5.

In a small conference which was organised to announce the partnership with Dada, Mr. Antony Jacob, CEO of Apollo Munich Health Insurance welcomes Sourav Ganguly to the Apollo Munich family. Mr. Jacob commended on the leadership and motivational skills of Ganguly all throughout his career and especially the display of courage in trying times. He added that the awareness of health insurance in India has been increasing over the last few years and people have realised the need for adequate cover for themselves and their family. The rise in lifestyle diseases and health issues is also alarming the Apollo Munich has been catering to the people’s demands by offering comprehensive mediclaim policies.

Knowing the focus and presence of AMHI in India, Ganguly also is very happy to be associated with them. He too believes that every Indian should have access to quality and affordable health care services. Just a few weeks back, Apollo Munich launched its unbelievable health insurance plan Optima Restore and it was a runaway success. Apollo Munich Optima Restore has an innovative feature whereby if the policyholder does not claim in one year then his/her insurance cover increases by 50% in the first year and doubles in the next year without any extra charge. The policy offers lifelong renewal and restores the entire basic sum assured in the middle of the year. The company doesn’t charge extra load premium on renewal if the policyholder makes claim during the current year. There are many more features clubbed with the seamless claim process of Apollo Munich which has given them a sizeable market share in the booming health insurance market of India.

With Sourav Dada flashing the Apollo Munich brand in IPL 5 this year, customers are bound to flock to seek health insurance covers from this stand alone health insurer.