Aviva Dhan Nirman is a traditional, participating Savings Plan which is designed to provide life insurance protection and a steady source of annual income through regular payouts.

Let's Understand The Plan With An Example:
Mr.Sharma is a 30 year old salaried employee. Mrs.sharma.29, is a homemaker.Recently they were blessed with a beautiful daughter.She is 3 months old now
Mr.Sharma wishes that his daughter receives quality education and becomes asuccessful and independent career women. He wants to save money while he is at the peak of hie earning capacity and wants to ensure a regular stream of income starting with his daughter's college going years.

Mr.Sharma take Aviva Dhan Nirman for a Sum Assured of Rs.5 lacs by selecting a Policy Term option of 21 years for which he has to pay an Annual Premium of
Rs.44,020 (exclusive of service tax) for 15 years. 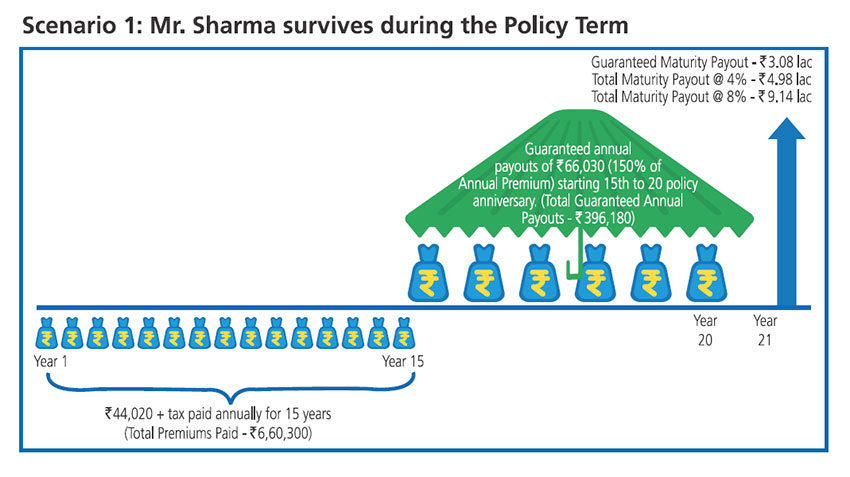 The graph below shows the premiums payable at different combinations of plan tenures, Premium paying terms (PPT), Sum Assured and age of the life insured. The premiums mentioned are exclusive of any taxes.

Premiums have to be paid for at least 2 years otherwise the policy would lapse without accruing any benefits if it is not revived within the revival period. After the first 2 years’ premiums and have been paid and later premiums are not paid, the policyholder can surrender the policy or make it paid-up.

If at least2 full years’ premium has been paid, the policy would become a paid-up policy if future premiums are not paid. The benefits under the plan would be reduced and would be called Paid-up benefits. Future bonuses would not be declared under the plan

Surrender is allowed only after the policy becomes paid-up, i.e. after 2years’ premiums have been paid. On surrendering the policy, higher of the Guaranteed Surrender Value (GSV) or the Special Surrender Value (SSV) would be paid. The total benefits payable would depend on the plan tenure and would be calculated as follows: