MetLife Major Illness Premium Back Cover Plan is a traditional health insurance plan which covers major illnesses which a policyholder might suffer. The plan also returns the premiums paid on maturity in case no claim is made.

Highlights of the MetLife Major Illness Premium Back Cover Plan

Working of the MetLife Major Illness Premium Back Cover Plan

The following chart considers the rate of premium payable by a male and a female at different ages for different levels of Sum Assured chosen. 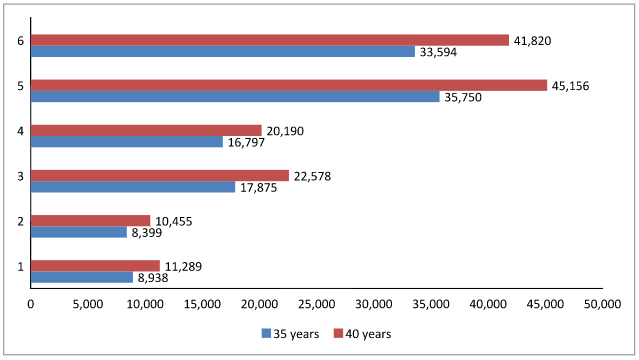 The table shows the tabulated premiums of the above chart for an easy reference:

Premiums have to be paid for at least 3 years after which the policy can be surrendered or made paid-up.

If 3 full years’ premiums have been paid and then the premiums are discontinued, the plan can continue on a Paid-up Value. The Sum Assured under the plan would be reduced and called the Reduced Paid-up Sum Assured. It is calculated using the following formula:

On diagnosis of any specified illness when the policy is in a reduced Paid-up state, the Reduced Paid-up Sum Assured would be paid. On maturity, the aggregate premiums paid under the plan would be refunded.