Aviva Affluence is a Unit Linked Insurance Plan which has been designed for wealth creation requirements for individuals. The plan also provides life insurance benefits along with the wealth creation objective it serves.

Highlights of the Aviva Affluence Plan

Working of the Aviva Affluence Plan

COMPARE THIS PLAN WITH OTHER ULIP PLANS

Being a ULIP plan, there are certain charges applicable. The charges include the following: 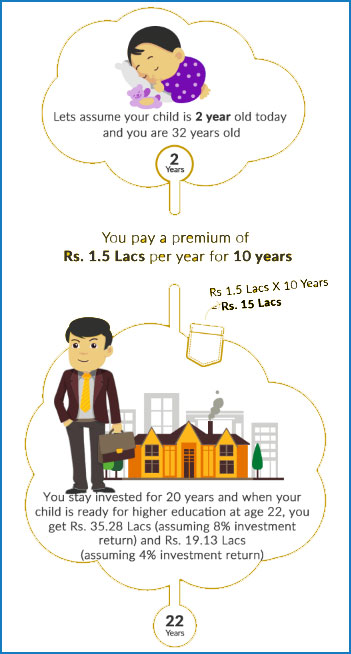 You also have an option of Systematic Withdrawal to fund your child's education if required.

The value with assumed rates of return @4% and 8% are not guaranteed and they are not the upper or lower limits of returns of the Funds selected by the policyholder and that the performance of the Funds is dependent on a number of factors including future investment performance.

If the premiums are not paid within the Grace Period, the policy would lapse. The lapsed policy can be revived, surrendered or made paid-up as per the policyholder’s choice.

The policy can be converted into a paid-up policy only if 5 full years’ premiums have been paid. After conversion, the policy would acquire a paid-up value which would be:

The Accidental Sum Assured would also be reduced on a similar basis when the policy is paid-up.

The death benefit payable under a paid-up policy would be higher of the following:

Revival is allowed within 2 years from the date of the first unpaid premium. The policyholder would be required to pay the outstanding premium and any interest charged by the insurer to revive his policy.
Insurance Calculators
NAV of all funds in Aviva Affluence Plan
Other ULIP Plans from Aviva
Similar Withdrawn ULIP Plans from Aviva