Aviva Wealth Builder Plan is a traditional Endowment plan which provides a guaranteed maturity benefit and guaranteed death benefit. Thus the plan provides life cover and wealth creation both of which are guaranteed in absolute terms. 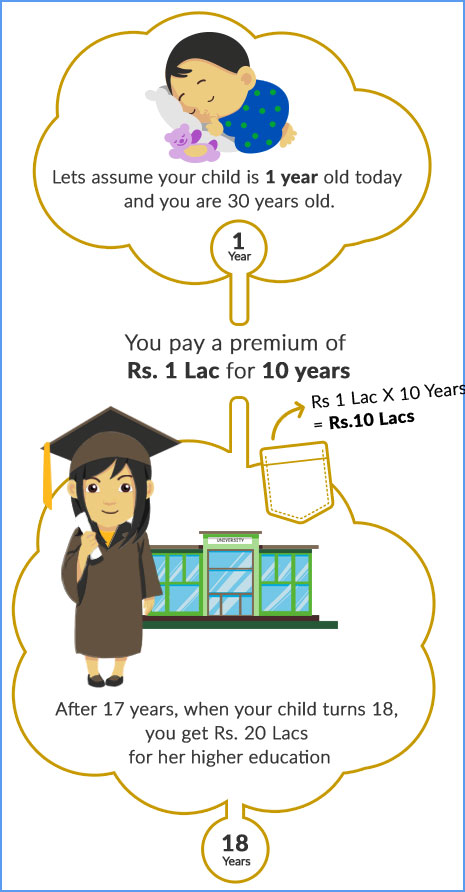 In the eventuality of death during the term, your family gets a lump sum of Rs. 20 lacs for continued financial support.

Please note:
MInimum premium is Rs.50,000 and the maximum premium is Rs.1Cr.Mimimu m age is 5 years and maximum age is 50 years Taxes including but not limited to Service tax, Cess as applicable shall also be levied as notified by the Goverment from time to time.
Tax laws are subject to change.Gurantee is subject to all due premiums paid.

Premiums have to be paid for at least 2 years in case of limited premium plans after which the policyholder can surrender the policy or make it paid-up.

If at least 2 full years’ premium has been paid, the policy would become a paid-up policy if future premiums are not paid. The Sum Assured under the plan would be reduced and would be called Paid-up Sum Assured which would be calculated as below:

If 2 years’ premiums are not paid for a limited payment plan, the policy would be deemed to be surrendered wherein 30% of the premiums paid would be refunded after the expiry of the period allowed for reviving the plan which is 2 years.
Single Premium plans can be surrendered anytime. In limited pay plans, surrender is allowed only after the policy becomes paid-up, i.e. after 2 full years’ premiums have been paid. On surrendering the policy, higher of the Guaranteed Surrender Value (GSV) or the Special Surrender Value (SSV) would be paid.
Revival