Bajaj Allianz Invest Assure plan is a traditional, participating, Endowment Assurance plan wherein premiums are paid for a limited tenure but the life coverage continues till the end of the policy tenure thus providing a comprehensive insurance protection.

The premiums mentioned above are exclusive of any extra premium loading and/or service tax & cess.
For female lives 3 year age set back is applicable in premium calculation. Vested Bonus at 8% & 4% is not guaranteed and is for
illustrative purpose only. For substandard and smokers extra premium shall be charged as per board approved underwriting.

Here is a specimen illustration showing the premiums paid by a 35year old male for a Sum Assured (SA) of Rs.2 lakhs and Rs.1 lakh. The premiums depicted are calculated at different Premium Paying Terms (PPT) for a policy term of 30 years. The respective premiums for the two plan variants are also displayed. 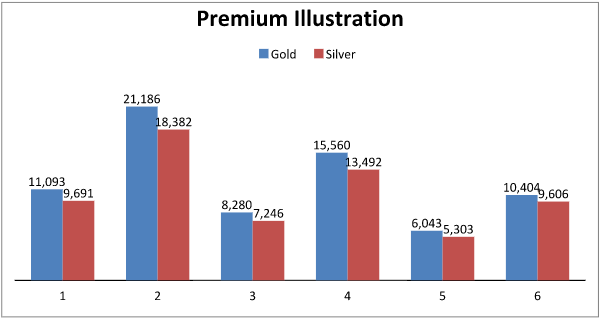 If at least2 or 3 full years’ premium has been paid, the policy would become a paid-up policy if future premiums are not paid. The benefits under the plan would be reduced and would be called Paid-up benefits. Bonuses would not be declared under the policy and the following benefits would be paid as and when they occur:

Surrender is allowed only after the policy becomes paid-up, i.e. after 2 or 3 full years’ premiums have been paid. On surrendering the policy, higher of the Guaranteed Surrender Value (GSV) or the Special Surrender Value (SSV) would be paid. Early Termination Value
If the policyholder has paid first year’s premium and then the compulsory second year’s or third year’s premium has not been paid, the policy could not be made paid-up neither surrendered. In this case, an Early Termination Value would be paid if the policyholder terminates the plan or does not revive it or dies, whichever is earlier. The value would be computed as: Revival

If a loan is availed under a policy, the loan and the interest therein should not exceed the Surrender Value in the policy. If the policy is in-force, this does not happen. If the policy is made paid-up, the policyholder would be notified and the policy would be foreclosed.
Bajaj Allianz Invest Assure Plan Brochure