You can customize your policy to suit your requirement in the following manner:
Step 1: Choose your plan variant:Super or Life
Step 2: Choose your Sum Assured
Step 3: Choose your Policy Term
Step 4: Choose your Premium Payment Frequency
Plan varient chosen at inception cannot be changed during the policy term.
Plan premium will be based on Sum Assured,plan variant,gender,age,policy term and premium payment frequency.

On maturity date,Nitin will receive the following Maturity Benefit:

In case of unfortunate death of Nitin at the end of the 10th policy,the nominee will receive trhe Death Benefit as given below:

2) Death Benefit payable Income Benefit:Rs.2,500 will be paid every month for 120 months.

Note:
Premium shown above is for 'Super' variant and is exclusive of Service Tax and any extra premium. Vested Bonus at 8% & 4% is not guaranteed and is for illustrative purpose only.

Here is a specimen illustration showing the premiums paid by a 30 year old male at Sum Assured (SA) levels of Rs.2 lakhs and Rs.5 lakhs and Super plan variant at different policy terms: 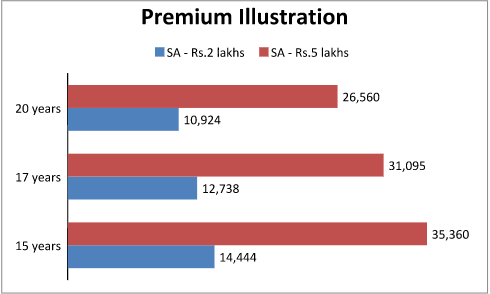 The table below shows the premium values of the above chart

If at least3 full years’ premium has been paid, the policy would become a paid-up policy if future premiums are not paid. The benefits under the plan would be reduced and would be called Paid-up benefits. Bonuses would not be declared under the policy and the following benefits would be paid as and when they occur:

Surrender is allowed only after the policy becomes paid-up, i.e. after 3 full years’ premiums have been paid. On surrendering the policy, higher of the Guaranteed Surrender Value (GSV) or the Special Surrender Value (SSV) would be paid. Revival