The SBI Life Smart Women Advantage Plan is a traditional, participating Endowment Assurance plan which is designed especially to cater to the insurance needs of women. The plan provides women with dual benefits of savings and insurance protection.

The following chart shows the premium rates for Gold Plan and Platinum Plan for a 30 year
female choosing 10 year term with the APC & CA benefit and without the APC & CA benefit.
Other details are:
Sum Assured – Rs.5 lakhs and Rs.2 lakhs
SAMF chosen - 2 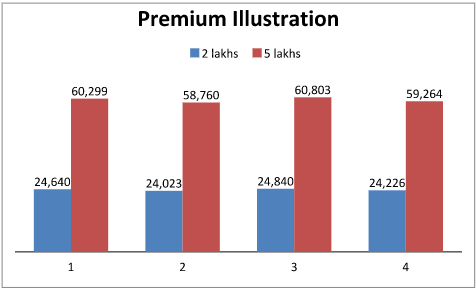 The premium table is mentioned below:

If at least 3 full years’ premium has been paid, the policy would become a paid-up policy if future premiums are not paid. The Sum Assured would be reduced and would be called the Paid-up Sum Assured. Moreover, the critical illness benefit and the APC & CA benefit would have no paid-up value.
Future bonuses would not be declared under the policy and the following benefits would be paid as and when they occur:

Surrender is allowed only after the policy becomes paid-up, i.e. after 3 full years’ premiums have been paid. On surrendering the policy, higher of the Guaranteed Surrender Value (GSV) or the Special Surrender Value (SSV) would be paid.
⦁    GSV = (Basic Premium paid excluding taxes * GSV Factor)+ (Vested Bonus* SV factors of bonuses)
⦁    The SSV would be declared by the company based on its performance and calculated as

Revival
Revival is allowed within 2 years from the date of the first unpaid premium. The policyholder would be required to pay the outstanding premium and any interest charged by the insurer to revive his policy.