TATA AIA Life Insurance Money Back Plus Plan is a traditional, participating Money Back Insurance plan where the Sum Assured is returned back in installments throughout the plan tenure while at the same time, full insurance coverage is provided by the plan.

Highlights of the TATA AIA Life Insurance Money Back Plus Plan

Working of the TATA AIA Life Insurance Money Back Plus Plan

The chart below shows the premium rates at different levels of Sum Assured and for different ages and tenures. 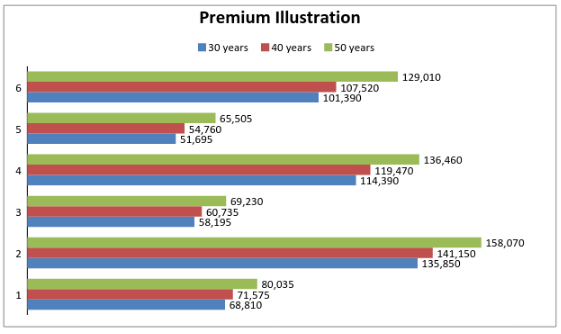 Exclusions in TATA AIA Life Insurance Money Back Plus Plan

Premiums have to be paid for at least one full year otherwise the policy lapses and no benefit is payable. After this compulsory period, the policyholder can surrender the policy or make it paid-up if the premiums are not paid.

If at least one full years’ premium has been paid, the policy would become a paid-up policy if future premiums are not paid. The facility of loan cannot be availed in a paid-up policy and bonuses would also not accrue. Survival Benefits are also not paid in a paid-up policy. The benefits payable under the plan would be reduced and called Paid-up Benefits which are calculated as follows: