Additionally, you can avail a Critical Illness rider by paying an extra premium.

LIC Jeevan Anand was launched on 1st Feb 2002 and was discontinued on 30th September, 2013. It has been replaced with a similar plan with better features. Check out details of the LIC New Jeevan Anand Plan.

If the insured dies during the term of the plan, the Sum Assured and the Accumulated Bonuses would be paid and the plan would be terminated.

We will explain the working of Jeevan Anand with an example: Suppose Arun who is 35 years old buys a Jeevan Anand policy of Rs. 1 lakh (Sum Assured) for a 25 years (Term). His annual premium would be Rs.  4,535

Scenario 1 – Arun dies in the 15th year of the policy
In this case, the Sum Assured of Rs. 1 lakhs and accumulated bonuses till the date of death would be paid and the plan would terminate. Bonus is declared every year by LIC. Check the LIC Jeevan Anand Bonus rates which are declared every year.

Scenario 2 – Arun survives till the end of the policy term.
In this case, the Sum Assured of Rs. 1 lakhs and the accumulated bonus till maturity would be paid to Arun and the risk cover under the plan would continue. Later, whenever Arun dies, the Sum Assured of Rs. 1 lakhs would again be paid to his nominee.
You can use the LIC Jeevan Anand Maturity Calculator below to check the total amount he would get on maturity.

So, the plan benefits are as follows:
Check the Bonus rates of LIC Jeevan Anand Plan

Even after Maturity, you will continue to enjoy a cover of Rs. for the rest of your life. This benefit will be paid out to your nominee in case of the policyholder's death.

Details of your Plan:

Even after Maturity, you will continue to enjoy a cover of Rs. for the rest of your life. This benefit will be paid out to your nominee in case of the policyholder's death.

A very common question asked to us: What is the surrender value of LIC Jeevan Anand Policy? So we are sure this will be helpful to many.

Eligibility conditions and other restrictions in LIC Jeevan Anand Plan

Premiums paid – The premiums paid for the plan are exempt from taxation under Section 80C of the Income Tax Act. The maximum exemption that can be availed is Rs. 1.5 lakhs.

The below illustration is for a healthy Male (non-tobacco user) opting for a Sum Assured = Rs 1,00,000and Policy Term = 25 years respectively. 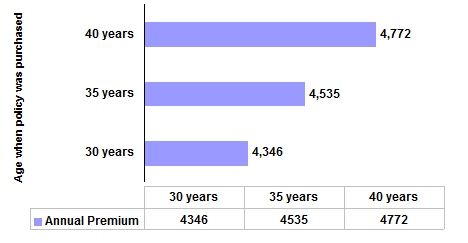 What happens when you stop paying the LIC Jeevan Anand Premiums?

Grace Period – Premium is required to be paid regularly on every due date. In case premium is not paid by the due date, a grace period is allowed for payment of the outstanding premium. This period is equivalent to 30 days for policies where annual; half-yearly or quarterly mode of premium payment is selected. In case of monthly mode of premium payments, 15 days is allowed as the grace period.

Paid–up Value – If premium is not paid even during the grace period, the policy lapses. If at least the first 3 years’ premiums have been paid, the policy is liable to acquire a paid-up value which is equal to the Sum Assured reduced in proportion of the total premiums paid against the actual number of premiums payable. The accumulated bonus is also added to this reduced Sum Assured to arrive at the Paid-up Value. Future bonuses will not be applicable for a Paid-up Policy and on death or maturity this paid-up value is paid out.


Some FAQs on LIC Jeevan Anand

I have missed my policy renewal last year by mistake can my Jeevan Anand policy be revived now?
Yes, a lapsed policy can be revived if the revival is done within 2 years of policy lapsing. The outstanding premium and any applicable interest for the lapsed period would have to be paid to the company for such revival.

Can I switch to a term plan after 5 years in LIC Jeevan Anand?
No, the policy does not allow switching. Once bought it should be continued for the chosen duration. If premiums are stopped, the policy would lapse.

Can I take loan in against my Jeevan Anand policy?
Yes, loans are allowed under the plan. Loans are allowed only if the plan acquires a surrender value as the limit of loan allowed depends on the Surrender Value acquired by the policy.